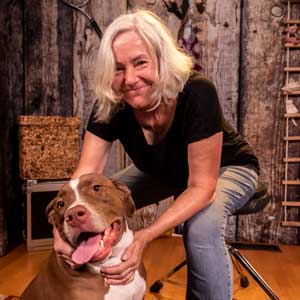 Jacqueline (Jacquie) Greff is Tonal Vision’s President/CEO and the force behind our video business. A relentless perfectionist by nature, Jacquie believes that art, music, relationships and a great story are actually superior values and works hard to foster them.

As a young woman growing up in a small town, Jacquie wanted to be taken seriously and have a career, so she turned to education, earning a BA in Chemistry summa cum laude in Iowa then an MBA from Arizona State. She joined Procter & Gamble in R&D in Cincinnati, OH eventually transferring to Hunt Valley, MD. In her 21 years at P&G, Jacquie worked on projects as diverse as developing the original Liquid Tide, getting the fat substitute Olestra approved by FDA, and developing a computerized product approval system used by safety, environmental and regulatory experts around the world. During that period, she also raised her son Shawn, supported her husband Kraig Greff in his music career, and finished her law degree at the University of Maryland in night school.

As a relatively young 50-year-old “retiree”, Jacquie finally felt free to choose the life she wanted. Rejecting the option to set up a law practice, Jacquie instead joined Kraig in the business he had started in 1990, Tonal Vision, expanding it from music and audio into video production. To “learn the ropes” in this new field, she earned her MA in Producing Film & Video from American University and volunteered for 6 years as Board President and Treasurer of the Television, Internet & Video Assn. of DC, Inc. (TIVA).

After 20 years of working with Kraig to build Tonal Vision into a respected video and music production company, Jacquie and Kraig were in an auto accident which eventually resulted in Kraig's death. Without Kraig's music, she closed the recording studio and refocused the business on storytelling with video. An important key element is a new documentary about Kraig's life, which is currently in pre-production.