Co-founder of the nationally-renowned Cajun/funk/zydeco group The Crawdaddies, Kraig was an accomplished composer, producer, and performer on piano and accordion in numerous genres, including a 2019 guest accordionist appearance with the Baltimore Symphony Orchestra. His career included touring with Barry White and Diana Ross, and an album with world-renowned percussionist Ron Powell.

A fiercely loyal and generous friend with a singular wit, Kraig enjoyed mentoring up-and-coming producers and artists. One example was Greff’s YouTube series, “Mice in the Attic,” which gave several Baltimore musicians their first area exposure. Kraig co-produced the shows with his wife Jacquie, a documentary filmmaker.

Survivors include Kraig’s wife of 43 years, Jacqueline Greff; stepson Shawn Story, Shawn’s wife Erin, and their daughters Sadie and Elora; and cousins Frank Zaverl, Harry Zaverl, and David Lent. Kraig was pre-deceased by his parents, Bert and Mary, and his brother, Timothy.

On March 27, the Baltimore Sun published a beautiful tribute of Kraig's life by Frederick N. Rasmussen. Here's a PDF version, if you have trouble accessing the Sun. 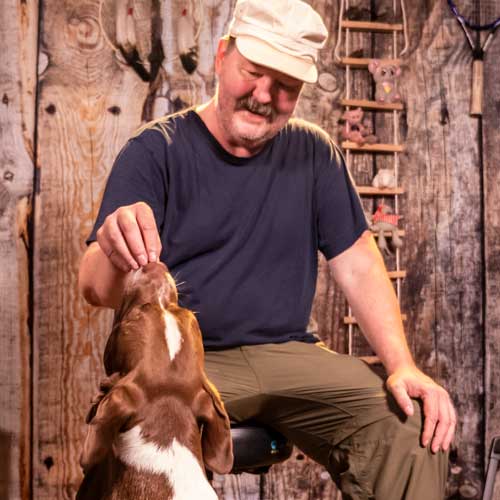 When musician extraordinaire Kraig Greff was a boy in Springfield, Illinois, he didn't worry about what he was going to be when he grew up. He already knew. By age five, he was studying classical accordion. At age 10, he was performing in clubs. His life was, and still is, about music.

This accomplished keyboardist has made a name for himself in the studio, in colleges and on the road, working with some of the best, from the Baltimore Symphony Orchestra to Diana Ross to Barry White. He writes music, and his original scores win awards.

Apart from his musical talent, his great strength is a unique ability to tailor each musical group and repertoire to meet the demands of the situation. Equally comfortable and proficient in a variety of musical styles, he can put together a jazz piano trio, an organ-based funk quartet, or a zydeco accordion ensemble.

Kraig comes by this versatility through extensive and intensive experience. As a young man in his early 20s, he toured the United States with several New York-based show bands, honing his already-considerable skills on a Hammond B-3 organ.

Settling down with his wife Jacquie in Cincinnati, Ohio, in the 1980s and early ‘90s, Kraig broadened his connections and experimented with new music applications. He toured as pianist with Barry White and his Love Unlimited Orchestra and performed locally with a number of major LA-based acts. He did a series of Yamaha-sponsored clinics on combining electronic and acoustic music with Michael Wolff, former music director of the Arsenio Hall Show. He recorded an independent album with world-renowned percussionist Ron Powell. During this same period, Kraig opened his business, Tonal Vision, a production house focusing on original music and audio for advertising, trade shows and other production work.

Relocating to Baltimore, Maryland, in the mid 1990s, Kraig expanded Tonal Vision and continued performing. Recognized by the Discovery Channel for its unique music and audio capabilities, Tonal Vision contributed to more than 200 of their shows. In 1994, Kraig toured with Diana Ross as her keyboard engineer. The following year, he cofounded The Crawdaddies, a national touring band playing a mix of original Cajun, Zydeco, funk, swing, soul, reggae, roots and rock.

The 21st century saw Kraig coming into his own, developing his own voice and style in music. His original music began to accumulate a series of prestigious awards. He was invited several times to perform with the Baltimore Symphony Orchestra as guest artist on the accordion, possibly the first in their history. As Musical Director, he helped develop The Crawdaddies into a polished, professional act. In addition to the steady stream of Crawdaddies' albums, Kraig also released several of his own, including "Hammond' Eggs" in 2008, "Joy" a holiday solo piano CD in 2011, and "Throw Me a Bone" in 2020.