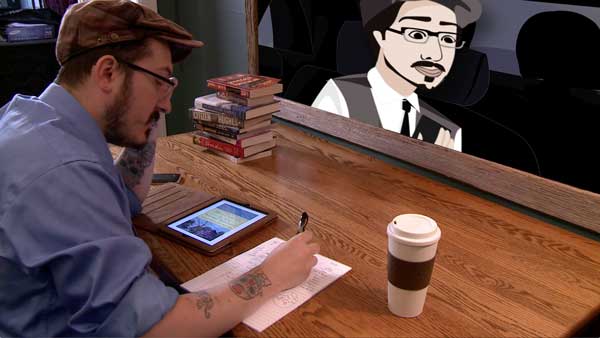 When it comes to deciding the format for a video, a major choice is whether to use actors or animation. Both are great assets but have their advantages and disadvantages, and both can be expensive or inexpensive, depending on how the video is designed and produced. The choice makes a huge difference in the tone and production process of your video.

Walt Disney once said “Animation can explain whatever the mind of man can conceive.” The source may be a bit biased but his idea is true: there are practically no limits in animation. As a result, animation is good for abstract topics that are difficult to convey with actors. Audiences are also much less critical of animated characters than they are of real life actors. But one of the best reasons to use animation is that it gives the video a stylized look that can appeal to your target audience as well as blend well with other communication graphics.

Production of an animated video is simplified because there are no sets or huge cast of actors, which makes it easier to control and to change midstream. With a little preplanning, animation can be managed to allow subsequent updates with new products, practices or styles, helping keep the animation timeless. And animation is more accessible now, thanks to software and online services that streamline the creation process.

The best animated videos require not just an animator but a whole team — scriptwriter, graphic designer, narrator, sound design and music, so good ones are not inexpensive. Even though animation has gotten easier, it is still an art form, requiring a great deal of skill, and the process is very time consuming. It will be up to your animator to create sets and characters, then they have to animate every movement, every blink and facial expression, every whoosh, etc.

Because animated characters almost always set a light-hearted tone, they require more care when selling or promoting something of a more serious nature. Highly technical or information-intensive topics can instead opt for motion graphics and kinetic text to deliver their message. Animation is also not usually the best option for displaying physical practices — for example, you probably don’t want an animated workout video or training on how to do the Heimlich maneuver.

William Shakespeare once said, “All the world's a stage, and all the men and women merely players.” The good thing about actors is that they’re everywhere — there is no shortage of actors looking for their big break. Even if you can’t find professional actors, we all know someone who can read. For small businesses, that the owner may be an excellent choice to connect with audiences and explain products and services.

Even though audiences are less critical of animated characters, they are more likely to relate to the human emotion of a live person. Actors have physical bodies and live in the real world. As a result, they can demonstrate how to hold a yoga position, repair window trim, or play an instrument in a way that an animated character cannot. In spite of their physical constraints, they can convey any tone or mood.

A high-end video involving actors can easily be as expensive or more expensive than an animated video. You need a good script, a director, casting, location, lighting, cameras, wardrobes, props and editing. Actors may be abundant, but good ones who are right for the role, have a professional work ethic, and are available when you need them, will cost. Making changes after the scenes are shot is difficult and may require expensive reshoots. Plus, with all of the changes in camera technology and fashion, using actors can make your video look dated very easily.

There are a number of drawbacks to live action videos. Whereas audiences think back fondly to cartoons when they see animated videos, but live action videos are more like TV commercials. If a scene is poorly shot, the wrong actor is chosen, or a viewer decides to tune into an irrelevant detail, the audience may miss the main message of the video. The biggest disadvantage that actors have is, although they can create any tone, they are still limited by reality in the visuals they portray.

There are times when using both animation and actors can be helpful and even necessary. Special effects are the most notable form of mixing actors and animation, and are used in many popular movies and shows. Actors and animation are also often combined in interactive learning and gaming. One of the latest trends in architectural engineering is to use both live action as well as 3D rendering to give a fuller view of the construction.

Whether to use actors or animation is all up to the subject matter and the resources available. You have to know who your audience is and what kind of message you’re trying to convey. If you want a light-hearted, stylized look, are trying to explain abstract concepts and processes, or need to lead your audience through reams of information to reach a conclusion, then choose animation. If you want to evoke an emotional response from your viewers or demonstrate a physical process, use actors. Either choice can be equally expensive if everything has to be outsourced. If you can do some of the work in-house and want to keep costs down, focus your message so that you can effectively produce a compelling video with the resources you have.