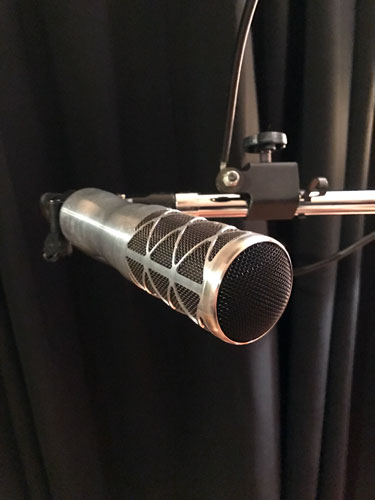 Following up on a meeting at the Government Video Expo, Eric Blackmere, Earthworks Audio, offered Kraig the opportunity to beta test their newest studio broadcast Mic.

We recorded as much variety as possible, given that we were pushed for time.

I set up to record in the studio with Jake Mossman, Director/Audio Engineer at Sheffield Institute for the Recording Arts in Phoenix MD. That day, I was recording Chris Huntington, guitarist and lead vocalist of the Crawdaddies, who was playing studio acoustic guitar for my client, Alex Carle. Chris was fattening up the already-recorded acoustic guitar track. The Earthworks mic was on one channel and a DI box on another. The chain was basically the EW mic, an API 3124 mic pre-amp, an SSL Duality console into ProTools HD. Speakers were Genelec 1030 near-fields and Genelec 1028s. The EW was characterless and uncolored — very smooth. Jake commented that the EW sounded almost like we were right in the room with Chris. We separately recorded the guitar with a small diaphragm Neumann KM84. At first we liked the Neumann better, but the more we listened, the more we liked the EW. It seemed to blend his guitar very smoothly in the mix and just to feel nice. It was also very fast. The Neumann seemed to stick out too much. Jake said, “I’m starting to really love this mic. There’s no mic in the way. Like he’s right here.” (No glass.) We both agreed the EW mic was very real.

Again I recorded Sheffield, this time Alex Carle on vocals. We used the same set-up, but this time the competition was a Neumann U48, one of the granddaddies of all vocal mics — we figured the EW had its work cut out for it. Jake was teaching a class of audio students so we had a lot of ears. At first, they tricked me and told me I was listening to the U48 Neumann. I said, “well, that figures — that’s some serious competition.” Then they told me I had been listening to the EW mic! Alex Carle said “he couldn’t tell the difference” between the two mics. Even Jake, a great engineer who has probably at one time or another used every important mic out there, was impressed, saying “I almost like the Earthworks more”! The EW was very open-sounding and the vocals sounded clean and transparent. If you want something that colors the sound, there are other mics. But if you want a very natural and transparent mic, this is the one.

Only one small caveat and it might be nothing — upon first use, a high-pierced squeal came out of the EW upon starting phantom power. Then after a couple of seconds it left, never to return. Everything worked fine after that.

Back in my studio at Tonal Vision, I took the files up to my third floor “nest” where I mix and loaded them onto Logic Pro. I have the same Genelec speakers as Sheffield and listened to the recordings of both mics. I decided to go with the Earthworks mic for the final mix. If you told me this mic was going to beat out a Neumann U48, well, I wouldn’t have believed it. Folks, you have a winner on your hands with this studio/broadcast mic!