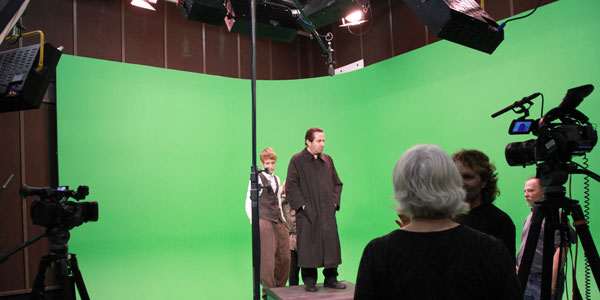 “Can anyone tell me how to get rid of the "Halo" around a person when using the green screen and shooting with HD cameras? The halo surrounds the talent on camera - who, at the moment, are not portraying angels.” This question posted in an online forum promoted such a flurry of responses that I thought I’d summarize and add perspective.

Chroma key compositing is the technique for recording one image with a solid background, usually green or blue (considered to be the furthest from skin tone), and subsequently subtracting that background and overlaying the result onto a different background. It is often referred to as greenscreen or bluescreen, depending on the background color used. Blue was originally used because the blue emulsion layer of film had the finest crystals and therefore good detail and less grain. Today, green is used most often because digital video cameras retain more detail in the green channel and therefore less light is needed and it can produce the cleanest key. Green is also a less common eye color and clothing color than blue. It is not always just the color of the background screen that is subtracted – a colored covering over part of an actor’s body, for example, can render that part of his or her body invisible in the final shot.

Chroma key is an important technique in feature films, video and television production, and even simple web videos. High-end video production switchers, such as the NewTek TriCaster, even take advantage of this capability to offer virtual sets which can elevate your look with realistic foregrounds and live moving backgrounds. Basic green screen has become relatively easy, but high quality keys still require excellent production techniques and equipment as well as the right software and editors skilled in its use.

The background is the most important production element. It should be even in color, matte rather than shiny, and evenly lit, without wrinkles or shadows, so that as narrow a range of color as possible can be replaced. Studios often paint a wall or stretch a piece of fabric tightly to achieve even color and devote a great deal of attention to balanced, even lighting. If a full-body shot is desired, it is necessary to have the color extend to the floor with the vertical background curving into the floor to minimize dark edges and shadows.

A related technology, popularized by Reflecmedia, uses a reflective curtain in the background and a ring of bright green or blue LED lights around the camera lens, which eliminates the need for special illumination of the background and reduces the amount of space and rigging needed.

When light bounces off a green background and onto a subject, the result is called spill. Because keying software works off of color, spill makes the background difficult to remove without also removing part of the subject. Even when the background can be removed, the subject may be left with an unflattering green coloration.

Hair type and style poses some of the biggest challenges to chroma key compositing. Tiny strands of frizzy or fly-away hair can often disappear with the background, giving the resulting image an unnatural look. Shine on hair can reflect the background color, causing glossy spots to disappear as well. Suggestions for minimizing hair issues during production include:

A final area of production that should be considered is the camera and its settings. Suggestions include:

Note that it is possible to allow the camera to move, zoom, and pan, if necessary. Unless the added background will be a solid color, however, it will be also necessary for the background to move or zoom in response to the camera movement. To allow for this motion tracking in post, tracking markers (small, high contrast reference points ) must be added onto the background during filming.

Most professional video editing software includes chroma key effects, but the quality of these varies and is a moving target. Third party plug-ins are often recommended if the included keyer isn’t working well for your situation, and different keyers have different features and are better with different situations. Recommendations from the online discussion include:

What do I use? For basic editing, Final Cut Pro X now has an excellent keyer, and I no longer find it necessary to use PHYX. For difficult situations and/or where motion tracking is needed, I use After Effects. Projects often present unique challenges, however, and there are many online discussion forums that can provide suggestions in these situations.

Special thanks to the following TIVA-DC members who contributed suggestions to the original inspirational discussion: