Building Blocks of a Music Career 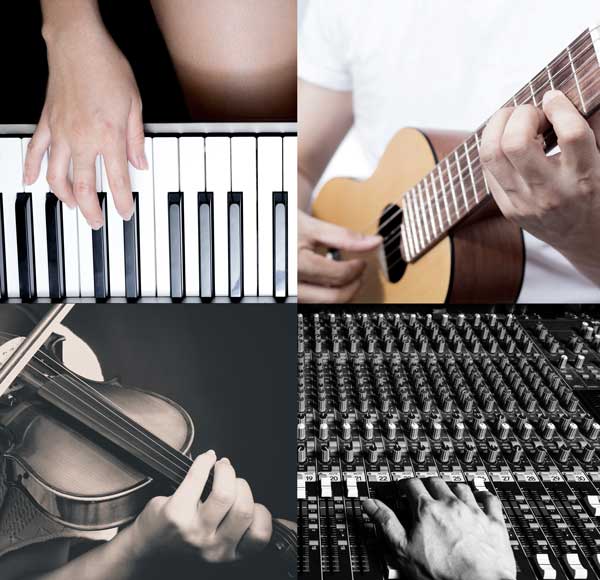 Building Blocks of a Music Career

Everyone knows somebody who plays an instrument, raps, sings or does some combination of all three. But actually being serious about a career in music takes a lot of time, money and dedication to keep going. Even though there isn’t one way to make it in the music industry, there are a few solid blocks needed to set the foundation for a career for an up-and-coming music act.

Have an Active Social Media Presence

The easiest, freest, yet most viable building block to a music career is social media. Social media is a great way to connect to your fans and other musicians, promote your shows and music, show your process, and so much more. These days, artists can blow up by going viral before they even get the attention of a record label. A great example is Lil’ Nas X who broke the record for having the longest running number one song in history because his song went viral. But it's helpful to do a little homework and understand the benefits of each platform to get the most from this investment.

Soudcloud is a must, especially for newer artists who aren't yet on any other streaming sites. It’s the most user friendly music streaming app and is also a good place to put links to your music for all of your other social media profiles. The goal with Soundcloud is to make your music as accessible as possible. When you are trying to become established, exposure is more important than small royalty checks -- so don't put your music behind a paywall.

Facebook is good for promoting upcoming shows with its event creation and integration into calendars. However, younger audiences aren’t making accounts nearly as much as they used to, so Facebook audiences tend to be older.

YouTube is great for high quality videos, so that’s where you’ll post your music videos, stream high quality live performances, and even host behind the scenes vlogs. Unless you’re doing a live stream, avoid posting unpolished videos on YouTube.

Instagram, the second most visited social media site after Facebook, is the place where people want to see the artist behind the music. So use Instagram to quickly post your unpolished videos, works-in-progress, you day-to-day routine, and personal life. Instagram is more popular among younger audiences, and the downside is that if your audience is over 35, there is a much smaller chance that they’ll even have an account.

Twitter is like Instagram where you can give the fans a quick fix. But Twitter users would rather have text than longer videos. Twitter also has a downside -- old Tweets have been used to alienate the fanbases of a lot of up-and-comers.

Record in a Studio

If you invest in anything early in your music career, it should be your sound. The cost of recording in a studio may be daunting at first but in the long run, your sound will be much more professional. For most genres of music, a professional/competitive sound is important, and it will also help keep your online audience’s attention.

To find the right studio for you, ask around to find one with a track record in your genre. You want good equipment, acoustics, and an experienced sound engineer, but avoid paying for features you don't need, and don't be afraid to ask for a discount.

If your budget is tight, don't feel any pressure to record a whole album at one time. The superstars aren’t even doing that all the time. Use your studio time to make one good-sounding single that you can use to promote yourself until you get the funds for another session. In the current era of music, up-and-comers and established artists alike often release single by single until they have a solid number, then compile them into a full album.

As soon as you can, add your music to streaming and download services such as Spotify and Apple Music. Physical copies are nice for nostalgia, but digital distribution makes your music much more accessible to the fans. “In today’s streaming world ... songs can go viral before labels, radio programmers and playlist curators can sort them into genre buckets.” Rolling Stone.

When you are starting out, you need to be as on top of your music as possible. Choose and join a music rights company -- the big ones in the US are BMI and ASCAP. Check into digital music distribution companies, like CD Baby, who can get your music on all the most popular download and streaming sites worldwide.

The most important function of an artist's web site is to serve as your press kit. Before the accessibility of the internet, a press kit would be a physical folder containing the artists' biography, a list of previous shows, a CD of their music, and maybe some pictures and interviews. Now, your website can easily contain all of that in one easy-to-send link that avoids the clutter of a hard-to-find social media site.

Your web site should look as clean and professional as possible, with a bio and contact info. Choose a short, easy-to-remember domain name. Include links to your social media and streaming sites. Bookers also like to see live performance videos so they can know how you sound outside the studio, so embed several if you have them available. At some point, you can also use your web site to sell merch.

Network. Network. Network. Meet other musicians and don’t limit yourself to any specific genre as you’re getting established. The best way to network is to go to other musicians' shows, and open mic nights. Send them a DM. Share their videos. Buy their music. Like their pics. Leave comments. These are little things that can lead to legitimate relationships with other artists.

You may not be able to collaborate with everyone, but you can share your knowledge about different venues, studios, sound engineers, etc. The best way to get support is to give support back. According to "Mice in the Attic" host Alex Carle, “Don't look at the musicians in your community as your competition; artists are more successful when they support and promote one another.”

Always be practicing your craft: always write, always practice your instrument, perform for others as often as you can. It takes a lot of mistakes to realize the best way to make your unique art form. And don't be afraid to sound rough when you start performing. Open mics, basement jams, and group songwriter sessions/jams exist for a reason: they are safe places for you to experiment and mess up in front of a sympathetic audience. Just attend as many of these jam sessions as possible to hone your abilities and get used to performing in front of an audience. If you can't find any jams in your area, organize one!

Eat healthy and workout. It’s not just cosmetic. A lot of musicians can fall into bad dietary habits as a result of their environment. It's easy to drink a lot when performing at a bar, and it's tempting to get fast food when driving from gig to gig. Your eating and exercise habits can give you the stamina to put on good performances, and maintain concentration during long recording sessions and video shoots. Vocalists should research foods and drinks that can help and those that can cause problems. Artists should also have warmups before they go on stage. Singers, do your vocal exercises (there are plenty online if you don't know any). Instrumentalists, stretch your fingers and arms before going on. And no matter what you do ... stay hydrated with plenty of water!

When you’re starting out, research is key. You should be researching venues, streaming services, recording studios, even your favorite artists and their rise to fame. Study charts. Get to know the music industry in depth. Understand distribution and learn as much as possible about contracts. Find salaries and pay rates. Understand accounting basics. Your research should prepare you for today, tomorrow and even ten years from now. It can save you from the numerous disasters that young, eager musicians can easily fall into.

The Most Important Advice

Keep going. It’s hard in the beginning, but you are passionate and talented. Real success is never overnight. Truly making it will take a lot of love, drive, and timing. You got this!