Filming a Presentation with Slides 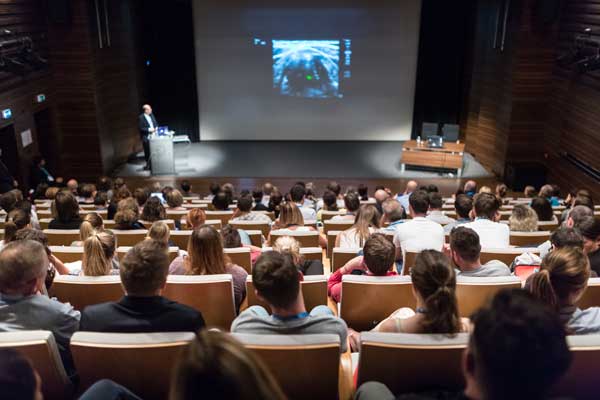 Recently, I sent one of our videographers to film a presentation about an artist and her designs, which included slides of her work. The videographer did a great job with the filming, but the edit was a nightmare.

I realized afterward this was really my fault, as we hadn’t strategized in advance how to handle presenter's slides. Hence this blog article.

Presentations that involve projected slides or video or a monitor screen in the shot are challenging, especially for those struggling with budget. The primary reason is that rarely are the presenter and the screen lit separately. If there is no lighting on the presenter, the screen will be much brighter. The videographer will have to choose one or the other — either the presenter or the screen will look good, but not both together. Monitor screens can also be a different color or have flicker issues.

The primary options for filming slide presentations are listed below. Most involve more editing time and thus will be more expensive. Make sure the client understands and agrees with your choice:

So why the nightmare edit in our starting example?

We failed to choose an option in advance. The videographer filmed organically, panning and zooming as natural to cover the substance of the presentation. The projection screen covered most of the shot during the time the artist was talking about her work.

To solve the problem, we did the basic edit first, then I brought the project into After Effects to motion track the screen and add the slides in there. In addition to my time, After Effects took ~8 hours to motion track the 1-hour presentation, then another ~10 hours to render out the finished video. Our non-profit client had agreed up front to pay for 1 hour of editing, so the rest of our work was free. But — the finished video looked nice, and the client was happy!

When filming any presentation, whether you are a pro or just covering for social media, here are some general tips: