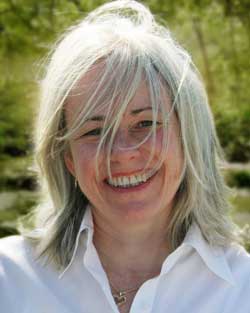 We love celebrating Women’s History Month by saluting our members who contribute so much to this community. Every day in March we will feature a WIFV Member who has created compelling work and mentored others. Today we celebrate Jacquie Greff!
[March 5, 2017]

Jacquie Greff is the President and CEO of Tonal Vision, a Baltimore video production house that focuses on smaller commercial productions. Recent larger projects include MEMORIES OF THE WARSAW GHETTO, a documentary produced for a deaf survivor of the Holocaust, which was done mostly in gratis, and the HISTORY AT RISK web series. After retiring from a career at Procter & Gamble in Regulatory Affairs, Jacquie joined her husband Kraig at Tonal Vision, expanding it from music and audio into video production. To learn this new field, Jacquie earned her MA in Producing Film & Video from American University and volunteered for 6 years as Board President and Treasurer of TIVA. At Tonal Vision, Jacquie happily exercises her artistic side by creating films, animations and web productions and applies her strong sense of fairness and fierce independence in the company’s platform of making professional video simple and affordable for clients and in the documentaries she produces. A relentless perfectionist by nature, she believes that art, music, relationships and a great story are actually superior values and works hard to foster them. Learn more about Jacquie’s work by visiting: https://www.youtube.com/user/JacquieGreff! Get Women's History Month off to a rousing start by supporting the 31 Women for 31 Days campaign. Your donation will benefit the WIFV Seed Fund for Documentary Filmmakers. Donate here : http://ow.ly/YVZp8