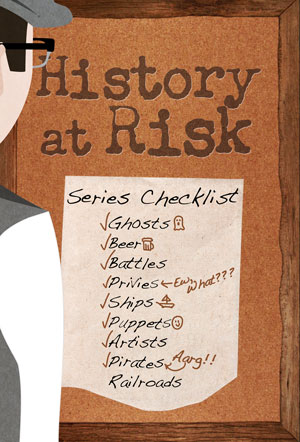 Frank Tybush has been parking on the same brick streets for years now. He works for Jacquie Greff, producer for Tonal Vision, which is located in historical Fell’s Point, one of the nation’s oldest communities. When Jacquie tasks him with documenting Fell’s Point, Frank discovers more than he expected.

History is alive, not just in the bricks that line the streets of historical communities, but in the people who cherish and preserve it. It’s much more than words in a boring textbook, much more than portraits, names and dates. But it is being lost. Buildings are torn down, rumors replace facts, and the public’s interest wanes.

Frank’s eyes are opened. He returns to Jacquie with more than just a completed assignment. He presents the stories of the people preserving history, and the unique ways they’ve done it. It’s too important, because, as he’s discovered, history is at risk.

Watch Season 1 on: Our Vimeo channel - Our YouTube channel

At the major annual festival for the Fell's Point historic district, Frank discovers that most visitors forget the history, but remember the bars.

With Halloween upon him, Frank finds that ghost tours sometimes hold more than paranormal activity.
They can hold glimpses into the past.

What’s historic about the Olde Tyme Christmas Festival?  The answer may surprise you as much as it surprised Frank.

Why is Frank surrounded by Pirates at a Privateer Festival?  The historical difference is greater than you may realize.

In his search for the essence of a historic community, Frank happens upon a group of individuals who have an infectious passion for preservation.

On the house tour, Frank gets a last minute interview at one of the oldest and most interesting houses in Fell's Point.

Frank revisits the Pride of Baltimore II, and learns how a vessel can be a living, working piece of historic preservation.

Frank digs up some archeologists who specialize in unique recoveries of artifacts.

Frank meets a retired Fell’s Point bar owner who has a top-shelf collection of artifacts depicting the history of local brews.

Frank’s quest for incredible history continues, but he’s in need of some direction.  He turns to the local visitor center for guidance from the experts.

In the final episode of the season, Frank talks with an artist about art’s role in history, and finds that sometimes, the most emotional art can come from a remembering a defeat.