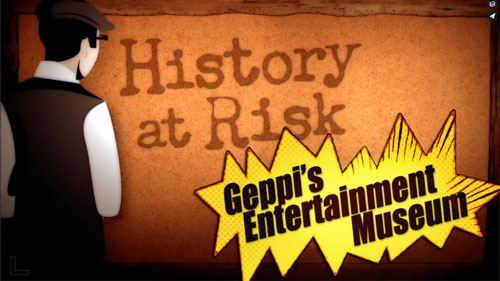 History at Risk Season 3:
Night at the Entertainment Museum

Fresh off his trip to the Carolinas, Frank heads to Geppi’s Entertainment Museum to explore the history of comics, entertainment, and pop culture. With zombies, superheroes, giant monsters, and radioactive rings ahead of him, Frank straightens his tie, cocks his hat, and heads into the historical fray. Excelsior!

Zombies, and Kaijus, and Gingerbread houses, oh my. Frank heads back to Geppi’s to look at what we watch, and read in a whole different way…a historical way.

With all the superhero movies flying at us, it's hard to believe that comics were once seen as bad. This episode, Frank digs into comic's controversial past.

In this episode, Frank talks with Onrie Kompan about how history isn’t just for the text books, it’s also for the comic books.

Frank ventures deep into Baltimore Comic Con and finds out that even a show like Archer holds history.

Comics may tell fantastical stories about the future, but they are largely stuck in the past when it comes to diversity. In this episode, Frank talks with Erica Schultz, writer of M3, about comics and their history with diversity.

In the final episode of season 3, Frank journeys inside the studio of artist and writer Shawn Martinbrough to talk about the power comics have to open people up to not only history, but places, people, and perspectives.