Fell's Point Out of Time 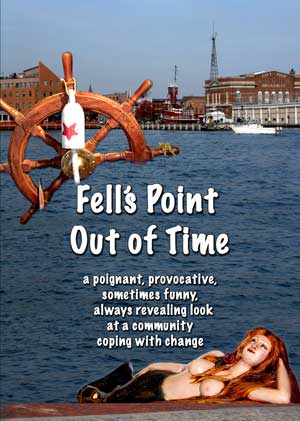 Fell's Point is that strange amalgam or anomaly—a town within another town. A bustling deep water port while our country was still struggling for independence, Fell's Point was dragged kicking and screaming within Baltimore’s borders, and never quite got over it. As a result, the community has maintained its own personality and spirit, to this day stubbornly resisting changes to its essential rough and tumble nature.

Although surrounded by signs and symbols of progress, Fell's Point, at least so far, retains the look and feel of an 18th century sailor town. A darling of travel writers, a worthy tourist destination, a bar scene, a marketplace, a virtual melting pot of a neighborhood—Fell’s Point touches something essential and true in all who come in contact with her. So why are so many people always fighting about Fell Point’s past and future?

Producer/Director Jacquie Greff trains her camera on Fell's Point and the people who live in or frequent this remarkable village. Everyone has a story to tell, and these stories form the narrative. From shop owner to community activist, historian to artisan, real estate developer to the cop on the beat—all of their perspectives merge to tell a story about a place unlike any other, in or out of time.

Fell's Point Out of Time (2004) is the story of Baltimore Maryland’s historic waterfront community, from its early years as the home of the famed privateers, “legal pirates” who provided much of the United States’ early naval resources, to its decline and near-demolition, and its current controversial rebirth. Fell's Point’s story is told by its friends and residents using interview clips arranged conversation-style with overlaid scenes of the community and archival photographs.

“Fell's Point is an area. Some call it a neighborhood. I call it a state of mind. It is an area that for more than two hundred years has been in a state of transition. It still doesn't know what it wants to be when it grows up.”

Baltimore’s original deep-water harbor, Fell's Point dates back to November 8, 1730 with the original land purchase by its founder William Fell. Fell's Point shipbuilders were so successful turning out their famed Baltimore Clippers that this “nest of pirates” became a major target of the British in the War if 1812. Its efforts helped turn the tide after many early British victories and the burning of Washington, D.C. itself.

Fell's Point is one of our country’s few intact historic working class communities. Many of its tiny houses, taverns and shops date back to the 1790’s and early 1800’s, after a series of plagues had driven out the wealthy, leaving sailors and immigrants and poor folks. One of its most famous resident, Frederick Douglass, was a slave in Fell's Point before he escaped and went on to lead the abolitionist movement that helped end slavery in the US.

Long a place where people of different races and ethnicities worked side by side, Fell's Point was the home of a large number of free blacks and sided with the North during the Civil War. Baltimore was torn apart as its wealthy merchants sided with the South, and the city went under martial law. After the war, Fell's Point’s shipbuilding trade, badly hit by embargoes, never really recovered. Shipbuilding moved out of Fell's Point with the advent of steel steamships, and canneries moved in. Fell's Point went into a long decline along with the rest of Baltimore’s polluted industrial harbor.

In the mid-1900’s, the city decided to use Federal highway funds to modernize its transit system, replacing its waterfront slums with a modern freeway.

After an 11-year battle, during which it was designated Maryland's first National Historic District, Fell's Point was saved, but its historic buildings were falling apart, its citizens were divided and only a growing artist community saw its potential. Ironically, the forces that helped preserve it also carried the seeds to its radical make-over into what is today one of Baltimore’s trendiest neighborhoods, an “upscale, gentrified, kind of updated, romanticized” version of its working-class past.