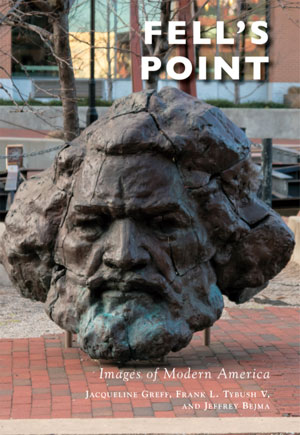 Fell’s Point history can be told as a “tale of two cities”: abolitionists and violent secessionists; fire-bombing murderers and community organizers; million-dollar condos and low-income projects; and world champion boxers and a myriad of panhandlers. This dichotomy has created a neighborhood unlike any other in Baltimore. One of the oldest neighborhoods in America, Fell’s Point has witnessed much in its 300-plus years. Originally Baltimore’s deep-water seaport, Fell’s Point’s privateers were crucial to winning of the War of 1812. After shipbuilding moved out and waves of immigrants moved through the community, it gradually fell into decline in the first half of the 20th century. In the 1960s, dedicated preservationists began a decade-plus-long battle to defeat city plans to demolish it for a highway. Today, Fell’s Point is a thriving, artistic, and eccentric community that welcomes one and all to experience its history, its culture, and its people.

Jacqueline Greff is a long-time Fell’s Point resident, author and business owner (Tonal Vision LLC) who produces documentaries and films. She is the author of a previous Arcadia book, “Images of America: Fell’s Point”, the producer of the documentary, “Fell’s Point Out of Time”, and of the web series “History at Risk”, and has designed and maintained several Fell’s Point-related web sites. She became interested in creating this book to help celebrate the 50th anniversary of the annual Fell’s Point Fun Festival.

Frank L Tybush V is a multi-faceted artist and the host of the web series “History at Risk”. As Creative Director for Tonal Vision, LLC, Frank produces award-winning, imaginative works for both commercial and artistic applications. Frank’s sculptures, Don’t Let Me Explodes and Sanctuary, made their gallery debut in early 2016. Other recent works include the promotional photography, logo, artwork, and music video for the Baltimore band, City Line Kids. Frank’s poetry can be found in the 2015-2016 edition of Fine Print, a local literary magazine.

Jeff Bejma is a Baltimore resident whose avocation is researching history. Jacquie and Frank got to know Jeff when they interviewed him for several episodes of History at Risk and felt his irreverent take on history would add an interesting perspective to this book.