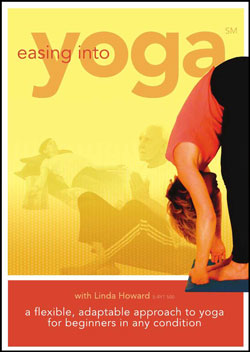 The second disc of Easing Into Yoga with Linda Howard was originally designed as an ongoing practice series. It was never commercially released on DVD because the market for this material was different (more advanced and younger) that the original Easing into Yoga. Also, people said it moved too slowly, so we felt it needed more work. We are hoping that a web version avoids some of these problems by allowing people to move at their own pace and choose to omit portions if needed.

This first page provides the 13 progressive lessons. It may load slowly because of the amount of material included. Note that any of these poses can be modified if needed for any physical constraints you have. See Easing Into Yoga: Modifying Your Yoga Practice for more information.